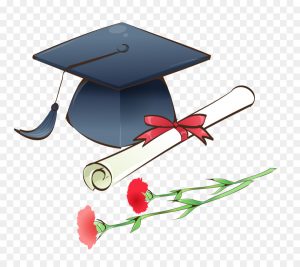 I successfully defended my Doctoral Thesis on Friday.  It signifies a personal and professional ‘crossroads moment’ in my life.  It concludes my more than thirty year long journey across the fields of activism with and advocacy for marginalised children and young people and commences a new chapter in my life.  As with all my crossroads moments I find myself reflecting on my family’s terror times.  An injustice which has driven me throughout my working life and will remain with me until my last days – child trafficking which the state, the church and a number of charities were complicit in.

There was a price on the head of children back in those days.  Charities were paid around $3 per trafficked child with bonuses available to homes that could provide large volumes of children.  So for the sum of nine dollars, still a measly amount in today’s terms, Mary, Margaret and Gracie, three of my father’s aunts, were packed up and trafficked to Canada.  There were forty nine children in that party so perhaps that shipment also attracted a healthy bonus for the traffickers. 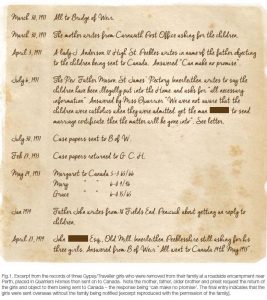 This is Gracie’s story: Born 1903, in a tent on the outskirts of Ayr, mother a Pedlar, father a Basket Maker. At the age of 6, taken, by the authorities, with her mother and two sisters, Margaret and Mary, from their camp near Perth to Perth Poor House where her mother had to sign the girls over into the care of Quarriers children’s home.

The girls spent almost four years in the children’s home.  They had no contact with their parents or siblings during this time.  Their father, being illiterate, had several letters written on his behalf requesting that the girls be returned to the family, even the local priest sent a letter, but to no avail.

The girls were sent to Canada aboard the SS Grampian, arriving in Quebec on 2nd June 1913 and onward to Fairknowe Home, Brockville, Eastern Ontario where they would wait to be chosen to live with or work for Canadian families.

Gracie’s oldest sister Margaret, being of working age (14) when she arrived in Canada, was immediately put ‘into service’.  Mary (aged 12) went to live with a Walter and Ad Smith from Athens, a small village near Brockville, and Gracie (aged 10) was homed with a family in Ottawa.  Mary was so disturbed by the separation from her younger sister that Walter Smith went to Ottawa to look for Gracie.  There he found her being used as a housekeeper.  It’s not clear what Walter said or did to the family in Ottawa, but it was enough to have Gracie given into his care and she was reunited with her sister Mary.

There is no doubt that Walter and Ad Smith provided a loving and caring home for Gracie and her sister.  Walter was unique in his time as he believed in post-secondary school education for women.  Both of the girls went on to further education and both became teachers.

Gracie’s sister Margaret’s life was a bittersweet one.  Her time in service was harsh, treated no better than a slave.  This was the case for many of the children of working age sent to Canada at that time.  She escaped this life by marrying a fellow Scot, but her happiness was short lived.  Margaret fell ill in her mid 20s and as her condition worsened she lost her sight.  Her husband called Gracie to her bedside hoping that the sound of Gracie’s voice would heal her, sadly this was not the case and Margaret died shortly after the visit.

Gracie married and had two daughters, Margaret Leslea and Sylvia Marie.  Other than stories of camp fires and her father and brothers leaving the camp for work, Gracie shared little of her life in Scotland with her daughters, although, when older, she did share with her daughter Margaret Leslea that she carried a ‘sense of loss’ for her family, particularly her parents and her older brother throughout her life.  That said, Gracie lived a full and happy life in Canada and was greatly respected in her community. Gracie died in 2002 at the age of 99.

What heartens me about Gracie’s story is her resilience.  It would have been easy for Gracie to allow the burden of her loss to become a barrier to a positive and happy future, to blame others for her terror times, but she didn’t.  Gracie found happiness in that new land, embraced it, and lived a full and contented life: a lesson for us all.

NB: If you haven’t already clicked on the link please do now and have a listen to Katie Theasby and Finbar Furey’s beautiful rendition of the Terror Times.